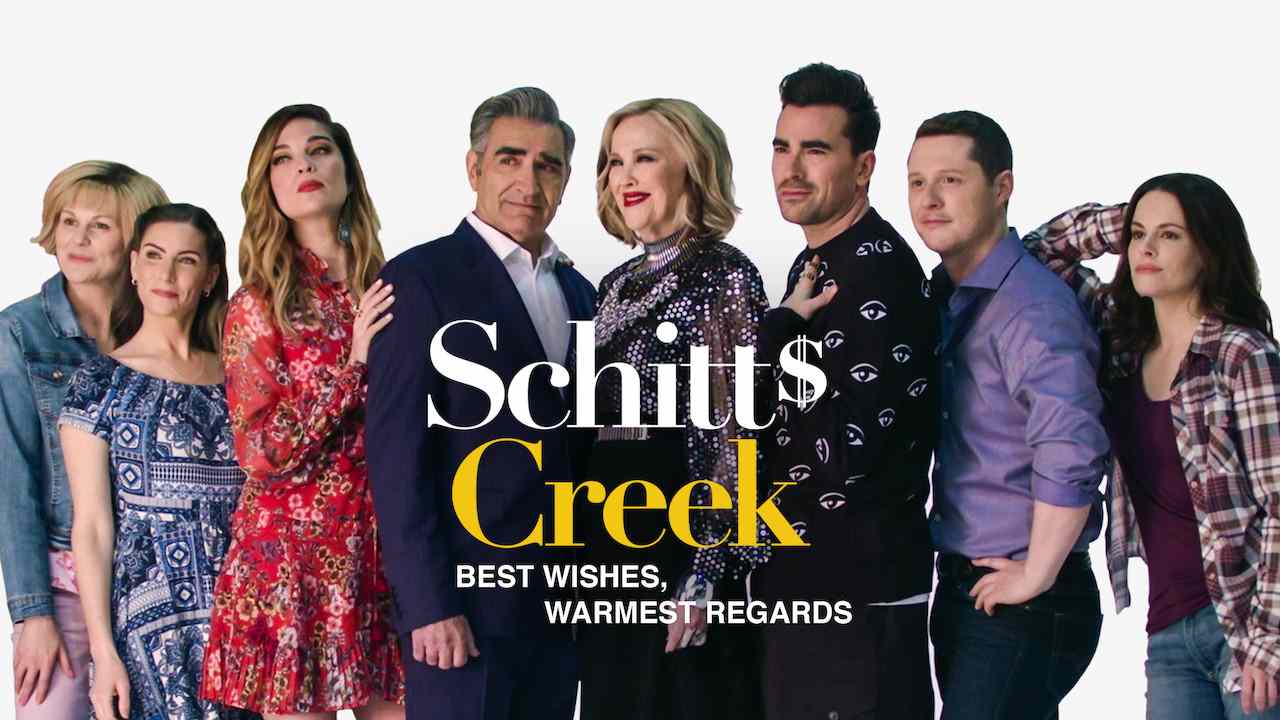 Schitt’s Creek is one of the most popular Canadian sketch comedy series. It’s silly and sometimes so fucking weird it’s hard to digest what’s happening. The town of Schitt’s Creek is not devoid of oddballs.

Daniel Levy, who played David Rose, did a brilliant job at envisioning the characters and writing the show. It couldn’t have been funnier. I loved every bit of it.

It might take one an episode or two to see the rich Rose Family fit into the poor old town, Schitt’s Creek. But once you start knowing more about Rose Family and the town, you would agree that Rose Family at the Schitt’s Creek was the most fun thing to watch. You would never want them to leave the town.

Though the show’s last season aired in 2020, it continues to find new fans. The show is divided into six seasons with each season having thirteen episodes.

The TV series It’s available to stream on Netflix.

Schitt’s Creek is a worldwide sensation. The show stars Eugene Levy and Catherine O’Hara as two formerly rich parents who have lost all of their money. Johnny Rose, their son played by Dan Levy, takes care of them to the best of his abilities.

Schitt’s Creek has some great comedy scenes that are sure to make you laugh out loud! Here are the reasons why we love Schitt’s Creek.

Catherine O’Hara who played Moira in the show is an award-winning actress and comedian. She is famous for her most iconic role as Kevin’s (main character) Mom in Home Alone. In Schitt’s Creek, she is not less of an eccentric mom.

She was the first choice for the character of Moira Rose and was definitely at her best in Schitt’s Creek series. Her bizarre behavior is so funny that it made everyone burst into laughter. Even after being stripped of all wealth, she dressed like she’s going to an award show every day.

Who doesn’t love Moira’s ever-changing wigs and her overdramatic attachment with them?

She not only had 24 “statement-making” wigs for every mood, but she also had a very off-putting accent, unheard of before. The accent and the changing wigs were actually O’Hara ‘s original idea. Her “Bebe” (her peculiar pronunciation for baby) still rings in my ears.

The TV show had me at funny and equally weird date stories of Alexis. Alexis had unlimited stories of her misadventures to share from the past.

Alexis’s quirky mannerisms and broken twist hand gestures were hysterical. Alexis made a lot of mistakes throughout the show and one of the fan-favorite moments would be the one where she over-ordered milk for her father.

Remember the time when Alexis gave a musical performance “Little Bit Alexis”? Her whole performance was rib-tickling. I wish her performance were longer.

Did you even feel for a moment that this is not a regular relationship? The show did an incredible job at conveying Love is Love. It totally convinced the audience completely that being queer is nothing weird. It is rather beautiful. Never Have I Ever seen such a romantic relationship.

Their first encounter when David had absolutely no idea about his shop, their first kiss, Patrick’s proposal, wedding preparations, and the best:

Remember this song from the show? Tina Turner released this song in 2009.

The way Patrick sings this song “Simply the Best” to David Rose is to die for. On a scale of 1 to 10, how much did you love that scene?

Shipping David and Patrick as a couple forever.

One of the most fun parts of the show was definitely this amazing brother-sister duo. “Ew, David”, “Burn, David” were just some of the fun phrases we loved hearing from Alexis.

The episode where everyone thought Alexis was pregnant was definitely the best one. David’s reply when his dad accuses him of not taking care of Alexis – “I’m not a condom” cracked me up. The show had a plethora of moments showing Alexis and David’s fun banter.

Even though the duo was constantly making jokes about each other, they hopelessly cared for each other. They went from being spoiled selfish adults to responsible loving human beings.

It was heart-wrenching to see the show ending after six beautiful seasons.

The finale was really beautiful. To start with, when the whole of Schitt’s Creek helped organize David- Patrick’s wedding when the weather uprooted all their open venue plans. Even when Alexis couldn’t end up with Ted, she was still happy.

She relied on herself for happiness and planned to live in NYC all alone for her career. David stayed back with Patrick in Schitt’s Creek because Patrick wasn’t keen on going to NYC and wanted to stay with David at the house they purchased. It was the perfect ending the show could have.

You should definitely watch this farewell which would tear you up –

Now that you have reached this part of the article, we know that you love the show too, so we are going to spill some interesting facts you would want to know about the show –

We would love to know your favorite moments from the show with us. See you in the comments!

Palak
Palak is a theatre artist with a passion for creativity. She loves photography and writing. Owing to her inclination towards social development, she tries to have a sustainable lifestyle while contributing to social causes.

13 Best Bollywood Dads Deserve A Special Mention: Learn What Makes Them Special? – 2nd Is My Favorite

10+ Best Female Performances of All Time in Bollywood [Hindi Cinema]

Some of the links on this blog are affiliate links. If you click through and purchase any product, we may earn a commission at no additional cost to you.